Surprising my dad for his 70th Birthday

Surprises are awesome..especially if they are planned meticulously.

I am currently living in Norway with my wonderful boyfriend Henning but I am originally Swiss so my parents naturally still live in Switzerland and I don’t really have time (or the money) to visit them as much as I like.

Now on the 17th of October my Dad turned 70 and my mom surprised him with paying me a ticket to surprise him for his birthday. That wasn’t all though: He also got a paid ticket to fly back with me and stay with us in Norway for a week. Well, that is the run-down.

So here is what went down:

On the 17th I got up at 4am and made my way to Olso Gardermoen to catch my flight to Zurich. My dad’s brother and his boyfriend picked me up from the airport and we drove towards Lucerne and then Ennetmoos were my parents live. My mom had an official “open day” organized where Family and Friends would come by for food and chatting and then stay as long as they want or leave as fast as they want. It’s a usual thing our family likes to do for such events.

My uncle called my dad earlier in the morning and made up an excuse and apologized that they can’t be there in person. My mom and me told my dad that I would be traveling during that day and that I had a work conference somewhere within Norway. So I also called from the car while we were driving and told him I found a quick moment while being in the cab to wish him a happy birthday. We talked about the weather (even though I was driving in the super sunny and warm Swiss weather already) and I said how much I wished I cold be there for the weather and his birthday, both.

So, naturally, he really didn’t suspect anything.

I was actually getting super nervous and giddy when we came closer and I was a bit afraid that he might come down or check who is driving into the parkway and hoped he wouldn’t notice too early. We parked on the side a bit hidden next to the house on the street..

First happy moment to see his brother (to the far right) and his brother’s partner..he doesn’t suspect anything… 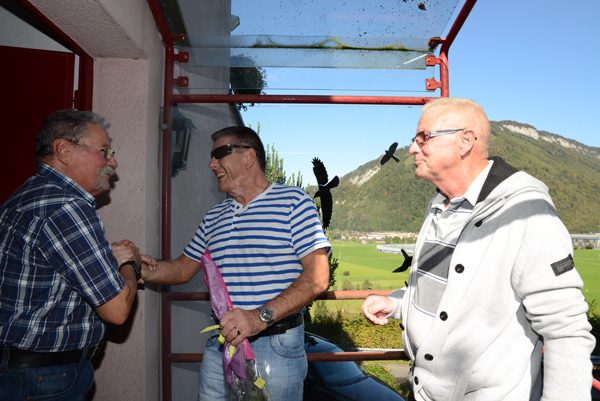 I am sneaking in behind them, trying to film and walk up the stairs while my mom takes pictures and some of the guests stand on the side and watch.. 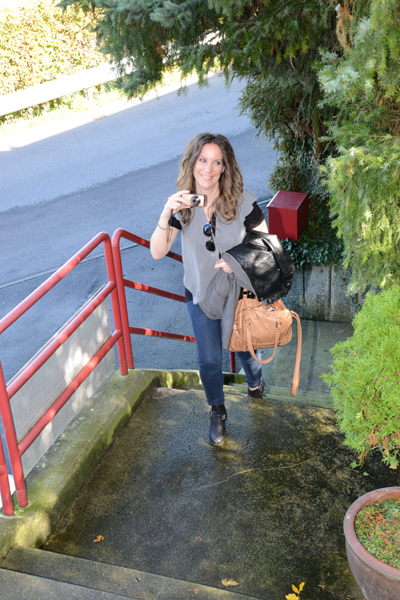 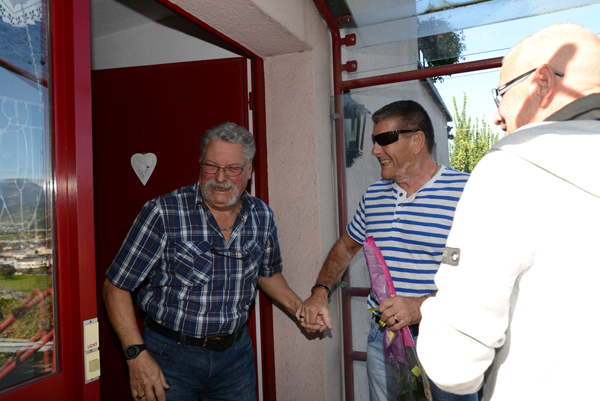 As mentioned, I wanted to film but he literally run inside and broke down..completely. 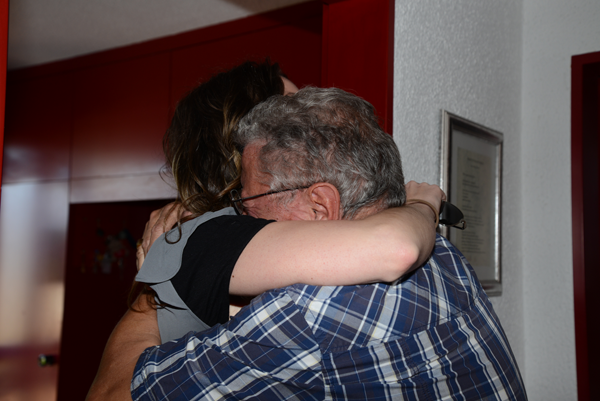 After like 15 Minutes he starts to regain his calm..a bit 🙂 (yay for smiley double-chins!) Looks evil with me so happy and he in tears but I swear it was happy tears! 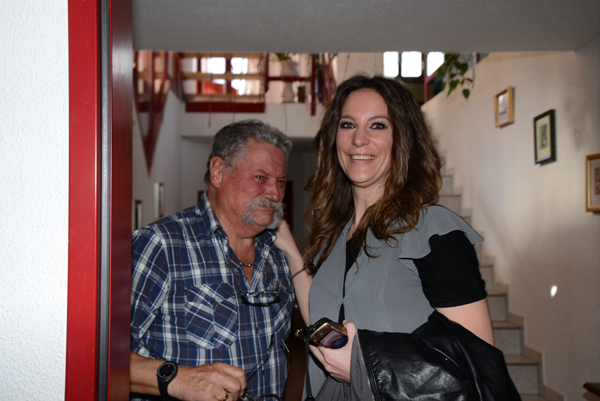 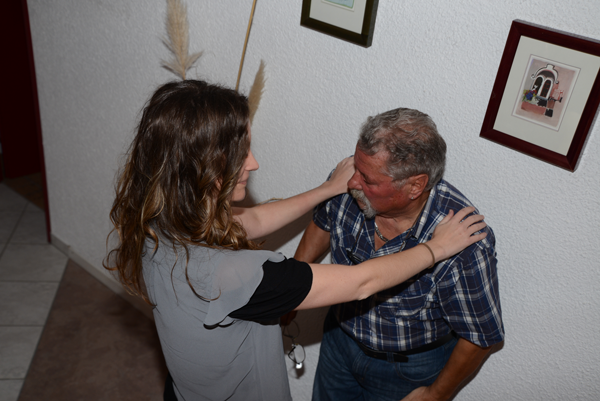 Second surprise when he gets the envelope with the tickets to Oslo to spend a week with us. Curtesy of our family. Another VERY tearful moment 🙂 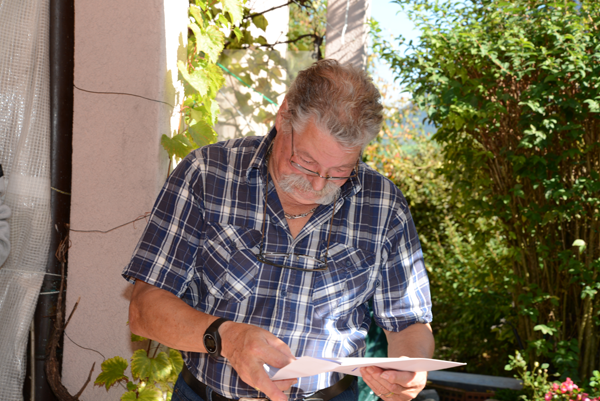 Finally, quite a bit later, we are unpacking all the gifts from Norway 😀 I think he trusted the flag the most.. 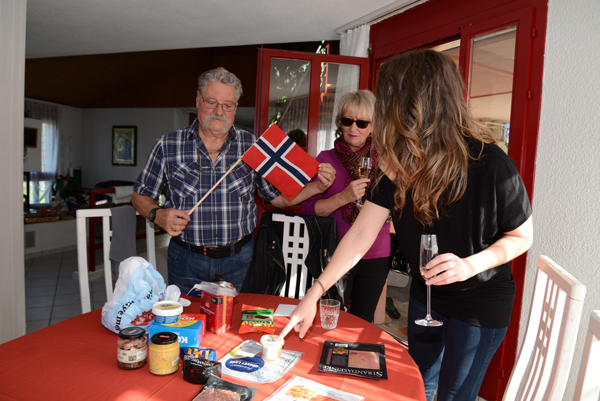 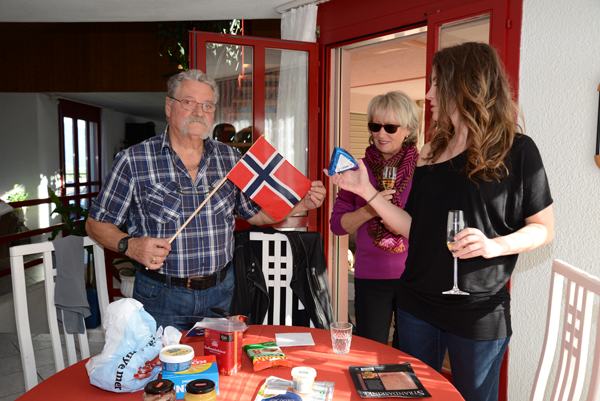 Happy people 🙂 My uncles in crime. 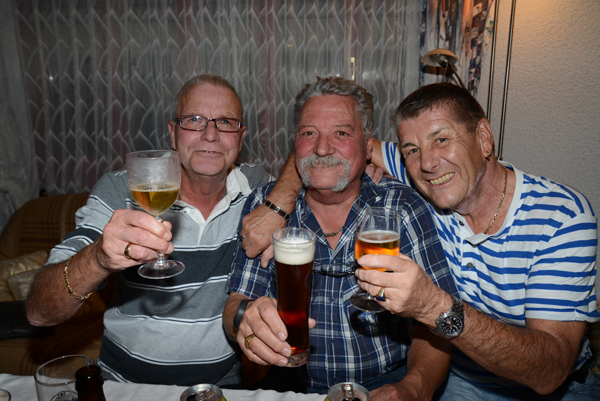 There were all in all around 50+ people who came by and celebrated my dad’s birthday. Amazing day with perfect weather and great people. I think it was a full success.

Thanks to my mom, friends and the family who made all this possible. I love you guys a lot <3
Special thanks to my mom, Teddy and Yvonne, Annelies and Rolf Müller, the whole Schleuniger Family and Gery and Hans for being partners in crime! 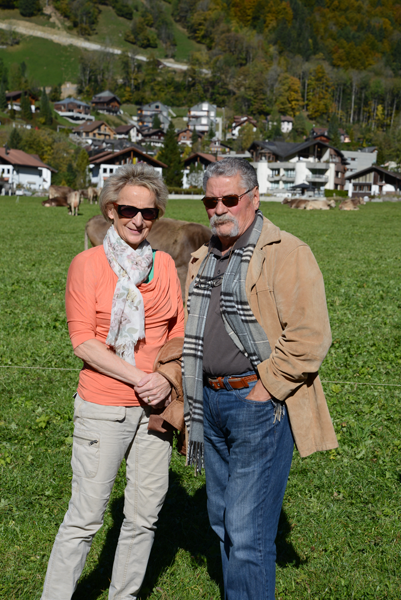